Is there a way to install OpenWRT on the TP-Link TL-ER5120 Router?
It has a OCTEON™ CN30XX Single Core MIPS64 Based Processor.
Running a RISC 64-bit Processor at 500MHz:

The device is EOL and i would like to revive it.
I found the octeon relasese here: https://downloads.openwrt.org/releases/19.07.7/targets/octeon/generic/

Can i use them, if yes, how should i flash them?
Thanks in Advance!

Fire up Wireshark and press the reset button (for a while), see if there's any traffic coming from it (like TFTP requests).

If not, open it up, see if there's a serial console.

It has a "console" port which is serial console.
A TFTP/PXE Request has the router not done.

Have tried to get more information about open port with nmap

There is a open telnet service, which i can access.
Login works with admin/admin.

I have forgotten to mention that my device is a V1

your serial console probably only works once the device have booted, we want to catch
what's happening before it actually starts the boot process.

use the preformatted text icon when pasting the output (ctrl-shift-c)
or pastebin, if there's to much data.

Thank you very much so far.

None of the commands work.
Which does me not suprise, the telnet is just a castrated what ever interface.

Sadly i have currently no serial/usb adapter to test the "console" port.
Tried with a Arduino Nano as USB/Serial converter, which does not work.

Pissed from that, I have opened the case and found something that could be a USB B Socket (Red marked): https://ibb.co/Tkm0LXW
Goes to the CPU and when you look close enough the pinout should match, D+/D- to CPU, the other two 5+/GND.

Do you have any other thoughts before i order a USB/Serial Converter & USB B Socket?
EDIT: Or i can just solder a USB Cable to it...

Don't know of that USB B socket will give anything, USB port perhaps, but it'll probably
not be of any use to us at the moment.

The white rectangular marking on the PCB, in the lower right corner might be something.
Three round holes/pads, plus one square.

I'd check the back of the PCB too, sometimes the solder points are just pads, and not holes.

The lower right square is labeled with "SW" (Switch i guess) and goes not in any way to the cpu.
On the back side there is nothing interesting. 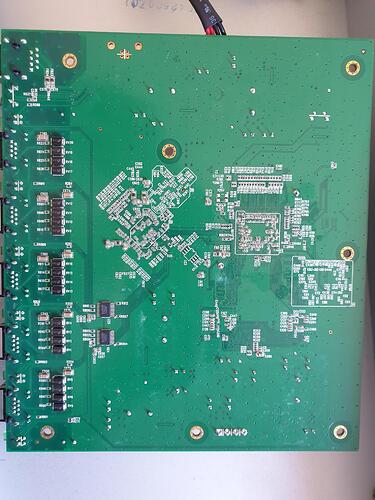 Didn't realize the 1st picture could be zoomed twice, couldn't read out the text in first zoom.

Ok, i will order some parts and play with the hardware to see if i can get some more information about the boot process, etc.

Is there no way to use the web interface or any other flash process (telnet console?) to (temporarily) boot OpenWRT?

I found this old archived thread: https://forum.archive.openwrt.org/viewtopic.php?id=44054 where i copied the cpu specs.

Well, you can try to simply flash the openwrt image using the web interface, but it should do some sanity checks, and fail.

It it'd work, you'd still want to have a serial console, if the unit doesn't come back up.

The last post from the old forum says 5120 and 5210 are "the same feature", what ever that means.
But if we'd assume there are similar/same this might be interesting:
https://translate.google.com/translate?sl=auto&tl=en&u=https://www.lan23.ru/forum/node/7005?t%3D8581

The TP-Link WA5210G is a WiFi Access Point, not a multi WAN/LAN/DMZ Router.

Would it help to reverse engineer a original firmware to build a custom openwrt image based on that? (To bypass the checks)
But that is far beyond my knowledge

Beside that, what image should i use to flash/boot?

What about the tar files?

then I guess feature means something else

The problem is the image might be signed, and you don't have the signing keys.

Then it's better to try to bypass the checks during flash, or try to flash from the boot loader (if accessible), since it usually don't do any checks.

I'd go with the generic initramfs.
The tars are for if you want to start building images yourself.

While i browsed trough the code i found some hints in it that it is already OpenWRT...
In the makefile as comment:

Playing with binwalk & original firmware from the download page:

It would be rely a pleasure for me to help.

While i browsed trough the code i found some hints in it that it is already OpenWRT...

So I've looked at the GPL code in the TP-Link website (there's only V4 though), and it does look like an OpenWrt derivative. However the source code didn't include the device tree for this device, hmm. If the hardware is (almost) the same as EdgeRouter 8 or already ported Octeon router, it would be easy to port this device!