Disregard, seems some queries bled out to an external dns

I am using adblock with a proxy in my network on client. Everything works fine but the DNS report from adblock shows localhost instead of the host IP address when an host use the proxy.

In tinyproxy, I enable and disable X-Tinyproxy header settings but the result is the same for both cases. The effect of this option is the following:

An header is added in the header with the client IP address.

I think the DNS report give me localhost because the proxy server is running on the same host than adblock.

How in case of a proxy adblock can use the host IP address instead of localhost in the DNS report ?

Guys I need your help with something. I have openwrt on mi3g, with adblock installed, but sometimes, when I turn on the router, after it connects to the internet, adblock does not start the lists, forcing me to manually reload it for the lists to load and this is annoying as hell .

Is there any way I can create a rule for it whenever the internet activates it automatically reloading the lists?

Hello, just installed this today on my WRT3200ACM and wanted to say thanks to Dirk and anyone else who helps with this project. It is a lot of fun and the price can't be beat

I've also had a lot of fun with Pi-hole but moved to the WRT3200ACM with OpenWrt to clean up my desk. One of the things that gave me confidence to install this was Dirk's nonstop support for many years on this forum. I was afraid it might bork my DOH config but the install was flawless and I'm up and running with OISD basic list. Thank you!!

Hi. Need advice why blocking works on android, Linux livecd but not on Linux laptop installation.
I don't use any VPN.

[SOLVED]
There was nothing in dhcpcd.conf.
But I forgot I added goggle dns to resolv.conf.head during installation.

I am facing issues with Adblock often erroring out with 0 domains blocked. This happens a lot as my PPPoE connection is somewhat flaky. Setting delay to 30 seconds in Adblock settings also fails, if it takes time to establish the PPPoE connection. Backup is also enabled, but that does not help much.

As Adblock trigger, I can only select wan6 as network trigger, and not pppoe-wan6 (Tunnel Interface).

Unbound shows the tunnel interface pppoe-wan6 in its own options, but not Adblock (where only lan, wan and wan6 are shown).

Can you make Adblock detect and display all interfaces including Tunnel interfaces, Aliases, and virtual interfaces, in the network trigger option?

My default install of Adblock is rather heavy-handed in what it is blocking. When a page is blocked, I would like to know which Blocklist Source caused the block.

Is there a way to report the blocking blacklist source to the user in lieu of ERR_NAME_NOT_RESOLVED?

If not, can someone advise me how I could set up logging in a way that would allow me to find this out?

Is there a way to report the blocking blacklist source to the user in lieu of ERR_NAME_NOT_RESOLVED?

No, the modern -https-everywhere- web is black or white, either the domain can't resolve (NXDOMAIN) or you talk to the right (ad-)server (courtesy of HSTS) - no injections possible (which would quite badly break site design anyways, most of the time).

Start with a small (well audited) blocklist and extend/ reduce it as necessary. Router side adblock will never be complete and should be un-obstrusive (if you need more than a handful of whitelisted domains for a given blocklist, maybe you should ditch the overblocking one altogether).

Ok guys , since updated my router, each time the adblock update automatically the database i read blocked domains=0 (00 10 * * * /etc/init.d/adblock reload on Scheduled Tasks ) . Manual update (reload) it works. Already installed libustream-mbedtls and libmbedtls but the problem persists. I don't know were's the issue (adblock or other) .

2° Question : Always for adblock i will use the "email notification options" that use msmtp. But msmtp doesn't have luci interface to configure it. There's alternative for msmtp with luci or there a luci for msmtp? ( i think not ).

I don't have clear if I can do the following:
google ads are blocked
but for a particular website, let's say www.aaaa.com, I would like to allow google ads
So google ads would be blocked everywhere except for www.aaaa.com
Is it feasible?

No, it's not - the router can't know which site caused the DNS request, it can either answer it validly for everyone or NXDOMAIN. If you want fine grained control, you can only do so at a place that has all the information in clear text, which would be your browser(-plugin).

adblock is working but I have no more (=there was previously) stats in DNS Report even after hitting refresh: 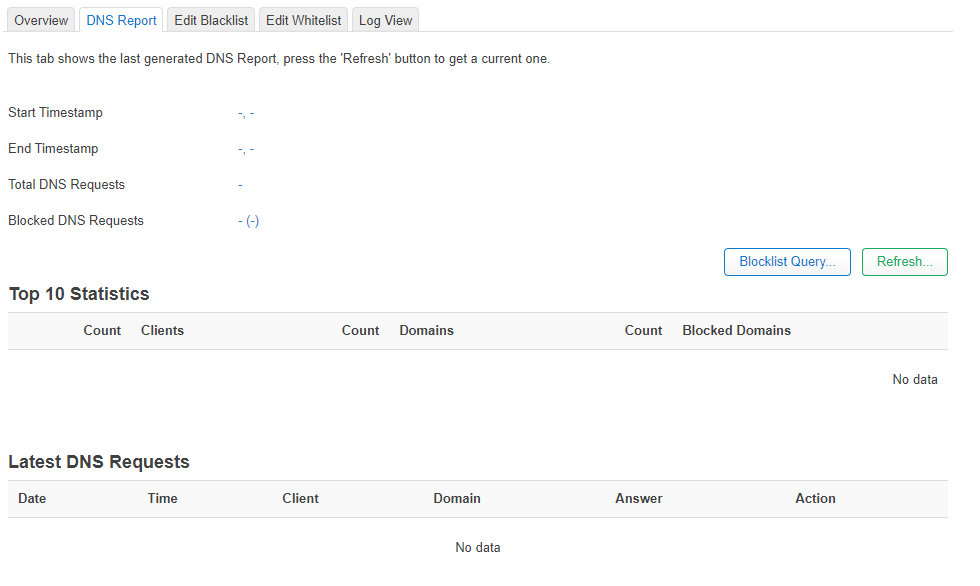 Is this a known problem or something I can do?

Hi! I have issues.

Either i did not set up something correctly, or the Source size chart is overly carefull.

I have an ASUS AC65P (256mp ram). It sat on 25-30% of ram.
I started adding sources from the given list. When i added all small, all medium, and all large sources (exept the reg_xxx ones) after the initial processig my ram usage just barley increased... When i started adding the bigger ones -as i expected- i have reached 90+% of ram usage, but after all precession finished it settled on around 80%, Showing 1.5mill blocked domains. Cool. But:

Why it is booting with less domains in the list than before the last shutdown/reboot?
How was it able to load XXL lists, if those should be "too big" for this device?

I noticed that setting

breaks the Amazon Prime Video app on Apple TV, showing an "Internet Connectivity Error", but no details as to what the actual error is.

Has anyone found a workaround make the app work and still force DNS redirects?

Does the option "Disable DNS Restarts" work with Unbound ?
And are there any side-effects when enabling this option ?

I ask because i want to prevent DNS cache flush when blocklists are updated by adblock.
This seems to be the only way were it works proberly.
The way which is described at Github ( installing the unbound-control module ) doesnt seem to work.
Or are there additional steps to do after installing the module ?

Hopefully someone can hrlp me with this.

Hi, just want to ask a quick question.
Is there an automatic rules update?

If this app can't do it, is there another way?

I'd like to have certain block lists for my children but not the same block for adults visiting the house.