Sorry if this post is a little messy.
I would like to ask a few questions, not linked together, for my own understanding:

Question 1) Real Wireless speed
I read several times that if the real speed of a wireless card is only half of the announced speed.

Another wireless card show 270 Mb/s in Linux and real speed is around 130 Mb/s.

For information, I am not sharing frequencies with anyone.

Where I work, there are a dozen of APs with same name on the same channels (one AP per room), with roaming enabled : 1, 6 and 11 channles on 2.4 Ghz and several channels on 5Ghz. There are at least 40 APs in the same range (as shown by LinSSID network analyser).

Are those APs sharing the same bandwidth, as each client has to listen and wait for time for air transmission? So do some APs have the ability to go to "sleep" mode and avoid perturbation.

So in a large building, do all APs in range listen to each other even 50 meters away?

So what is the best in a large building :

Question 3) Frequencies in a mesh
In a 802.11s mesh, all APs are connected on the same radio channels.
Do they share the same bandwidth? I guess yes.
What happens when some APs are not in range?
Do they transmit at the same time?

Question 4) Mesh + APs
If all APs in a mesh (with no wired connection) are using the same bandwidth, it may be interesting to use the mess as an uplink (main link) on 5Ghz and use 2.4 Ghz frequencies for AP (or the converse). Does it sound correct? Is there any interest in adding a lot of mesh members (APs) in the same neighborhood?

Question 5) Math model for best bandwidth
Is there some kind of mathematical model available, where using number of inputs (Available frequencies, number of clients, etc ...) I can calculate the best values for a network (and chose the number of APs). Or it is only empirical?

Thank you for your answers.

I read several times that if the real speed of a wireless card is only half of the announced speed.

For information, I am not sharing frequencies with anyone.

Frequency was one of the only relevant things as it related to "bandwidth"...nonetheless, that information is not accurate and I'm really unclear on your math.

Evenly dividing APs among the channels and clients needing to use as to have least overlapping.

It's ad-hoc, you need to research this.

Question 5) Math model for best bandwidth
Is there some kind of mathematical model available, where using number of inputs (Available frequencies, number of clients, etc ...) I can calculate the best values for a network (and chose the number of APs). Or it is only empirical? 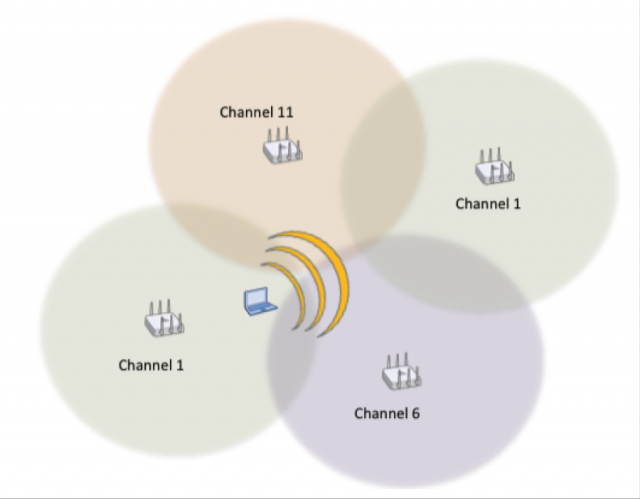 One aspect to add would be

In wireless networking, the hidden node problem or hidden terminal problem occurs when a node can communicate with a wireless access point (AP), but cannot directly communicate with other nodes that are communicating with that AP. This leads to difficulties in medium access control sublayer since multiple nodes can send data packets to the AP simultaneously, which creates interference at the AP resulting in no packet getting through. Although some loss of packets is normal in wireless networki...

which does affect both APs operating on the picture above, even if they can't really see each other (as a rule of thumb, you are affected by a hidden node about 3 times the distance you can see). The enterprise strategy to fight this, would be using highly directional antennas and very low transmission power - in an ideal scenario four APs mounted round a column in the middle of the storey, each covering 90° with little overspill to the sides or into other storeys above/ below, in combination with a good channel distribution avoiding each other as much as possible.

Obviously this 'ideal' setup is only (financially-) viable in a large commercial setting, but the lessons that can be learned from that for home uses are still to use many APs (stock omni-directional antennas), with as little txpower as possible and trying to avoid the frequencies already in use by adjacent APs (3d room, not just 2d).

At some point, it makes a 802.11s mesh irrelevant if all APs are sharing the same channels. Also, the uplink should always be wired and roaming enabled.