Maybe in the future as IPQ60xx series support upstream is bare, just clocks and minimal to boot.
Not even ath11k supports it yet.

The more I read about ax the more I understand just how immature it still is: 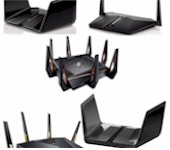 SmallNetBuilder provides networking and IT news, reviews, help and information for professional and prosumer home, SOHO and small business users.

** There was no throughput gain observed from AX vs. AC when using 5 GHz.** Even though our test STA got the expected 1201 Mbps link rate with all routers with the strongest signal, this did not translate to higher throughput. In fact, both AC and AX STAs were only able to get 700 Mbps at most and usually below that. 5 GHz uplink with the AC STA actually produced the highest throughput!

No thanks, I will wait couple of years for first Archer C7++ to appear

Fair enough. For work space sporting dozens of ax-capable laptops, it will probably make much more sense. But for a household with couple of ipads and iphones, there is little to gain.

the gain is really better cpu and more ram... It's indirect but this would give more real world download and upload speed. Ax standard is just an excuse to make newer and powerful SoCs at the same price

I agree that the increased system performance is the biggest gain (especially for routing at 1 GBit/s and beyond), but 802.11ax does also provide a significant speedup (to the extent that wired 1 GBit/s ethernet has become a bottleneck). The mentioned benchmark, while technically correct, however lends itself to being misread, as you need to be very careful to keep theoretical link data rate and effective throughput separate, sprinkled with differences in the number of rx/ tx chains (intel ax200 is 2x2, so a router providing more than that is not showing its real potential).

Well I think the biggest advantage for those with big houses may be in the 2.4Ghz network. 2.4Ghz network was already better for going through walls, and now that it has all the feaures than the 5Ghz network already had it should work faster and reach further distances.

As mentioned, ax is all about more efficiently using the bandwidth we already have rather than going for the typical more bandwidth + more symbols hammer approach to gaining speed.
And this makes a lot of sense in the 2.4GHz space particular given it is already overcrowded.
The SSID colouring may even make this better again.

Anything that Compex creates is expensive.
Just wait for released boards that are based on it.

4 posts were split to a new topic: Support for Netgear Orbi RBK852

Two days ago i received Xiaomi AX1800 and im suprised how good range it has. Lately i tried few different routers (up to 80$) and this have the best coverage. Currently only original chinese FW is available but i hope sooner or later WRT will be also there.

WIFI-6E (6GHz) is also going to be a nice addition. I'm mostly waiting until that becomes available in commercial style access points before I upgrade my wifi hardware again... Of course if it takes forever I may break down and get myself some TP-Link EAP225s... mwlwifi is pretty annoying and I've got 2 of them at the moment.

I am looking to get one too.
It has a interesting CPU that is IPQ807x based but with one NPU core instead of 2.
Its a budget CPU but they have left all of the networking like in IPQ807x, so 10 and 2.5 G ethernet as well as 5x 1G ports.

How much have you paid?
I am hoping to get one from EU to avoid waiting for months

I ordered few days after premiere and i paid 64.32$ on aliexpress. Now they are even cheaper (54.06 from same seller). 21 days from order to delivery to Poland.

Is there any technical reason to pick the Ax1800 over the Ax3600 or is it just a personal choice?

what are we talking about can you provide a link ?

This is the device (sorry for the long link):