Hoping to pull on the community knowledge here, its my first post so apologies in advance if any of my terminology is wrong, I'm very much self taught.

I've been using OpenWRT on my Linksys WRT3200ACM since July '21. Its extremely stable since its initial setup (bar one user error issue.)

Last night I noticed an issue where my Sky Q box wasn't connected to the 2.4ghz WIFI band. I tried various things to resolve it, hard reset of box, reboot router etc. I then noticed none of my other devices would connect to it, and my smart home devices were also offline,

I couldn't figure the cause, so decided to create a backup of my router settings, and do a system restore. It turns out my something had gone wrong with my backup, so I had to do a fresh install.

Following me grabbing the latest firmware and doing a fresh install I set about reinstating my settings.

My Wi-Fi had previously been setup as follows:

1 x 5ghz with a unique SSID
2 x 2.4ghz both with a unique SSID 1 with WMM enabled, 1 without (this is for smart devices, following research on this forum aware there is an issue with the chipsets on these devices, that means WMM has to be disabled)

This has worked flawlessly since initial setup, until things went wrong last night. When configuring the settings again post fresh install, as soon as a add the second SSID the 2.4ghz Wi-Fi stops working. I can see that radio 1 (2.4ghz radio) starts showing the device 'is not active'

One SSID assigned.
can only embed one attachment>, so image removed. Image showed 1 SSID setup and running.

Prior to the Wi-Fi issue I've not made any configuration changes for some time, so I'm really drawing a blank here. I presumed a fresh install and configuration would resolve the issue, but it appears not. I can only think its a hardware issue at this point based on my layman's knowledge.

Anyone? I’ve attempted to contact linksys direct but they’ve told me as I’m using OpenWRT they can’t support.

Thanks for the link. That’s sounds exactly like my issue, what’s odd is that is has worked for so long to now throw an error.

I’ve never really done any setups via SSH, I note the posted ‘work around’ below:

“ I changed both BSSIDs and now it works correctly. I changed the U/L bit to L and started from 1 in the last nibble”

But I’m not sure how to do this, can this be done using Luci?

@yoeljacobsen I’ve seen you raised the issue relating to the multiple SSID bug, I too am experiencing this issue. Are you able to help a layman implement the work around, my smart home devices are currently offline as I can’t run my additional 2.4ghz network.

How do I amend the BSSID using command line?

I'm really struggling here, I've been unable to run the second SSID on my 2.4ghz radio due to the bug FS3904

My smart home devices have been offline for 2 days already, and cannot use the normal SSID on 2.4ghz due to them not being stable with WMM mode active. I'm really at the mercy of the community here.

What further information do I need to supply to get the relevant support?

SSH in to the router and run cat /etc/config/wireless

Redact the passwords in the "option key" sections.

Post the results in "Preformatted text" (the icon hightlighted in red).

Please see below, I've added the additional SSID on the 2.4ghz radio, but not commited the changes as it'll force my other 2.4ghz SSID offline.

I've added the additional SSID on the 2.4ghz radio, but not commited the changes as it'll force my other 2.4ghz SSID offline

That appears to be the workaround mentioned in the bug report.

changed both BSSIDs and now it works correctly. I changed the U/L bit to L and started from 1 in the last nibble:

Thats the odd thing, mine has worked flawlessly since I initially started using OpenWRT last July, then two nights ago something changed, without me making any administrative changes to the router.

I assumed a fresh install would fix it, but it didnt.

I've committed the change to include the two SSID on 2.4ghz, and copied the output below.

How do I got about setting a unique BSSID for '1NHLS8' via SSH command?

Edit the wireless config file in /etc/config and change the MAC address (which is used for the BSSID).

I can see the following:

Disabling the 3rd SSID (with the added mac address) restores access to the 2nd SSID.

Anyone? I really don’t know how to resolve this.

Not clear what you mean here, but if you are using the third radio be sure all are in agreement as to CC; since appears to be EU unit FR. See readme

I’m not using the 3rd radio. I realised as part of my troubleshooting I’d set up a ssid, but it was disabled. This has since been deleted.

Following a fresh install on the latest firmware I’m still having an issue where If I add a second ssid to the 2nd radio. It deactivates both.

My symptoms are very reminiscent of FS3904 ? and I can’t seem to resolve it.

If this is an EU unit CC is FR, make the same or leave out entirely.. Some have also reported that removing all option macaddr works.

Edit; Not sure what is meant by latest, but use 21.x snapshot or master as there is a fix you probably want, but nothing to do with this fire fight.

I've installed the SFTP package so I can edit the wireless config file on my desktop.

I've manually changed my BSSID for 1NHLS8, meaning there shouldn't be a conflict. However whilst 1NH248 is showing as enabled. I simply cannot connect to it.

both 2.4ghz SSID enabled, not possible to connect to 1st SSID

I can see the network, but I get connection failed when attempting to join. 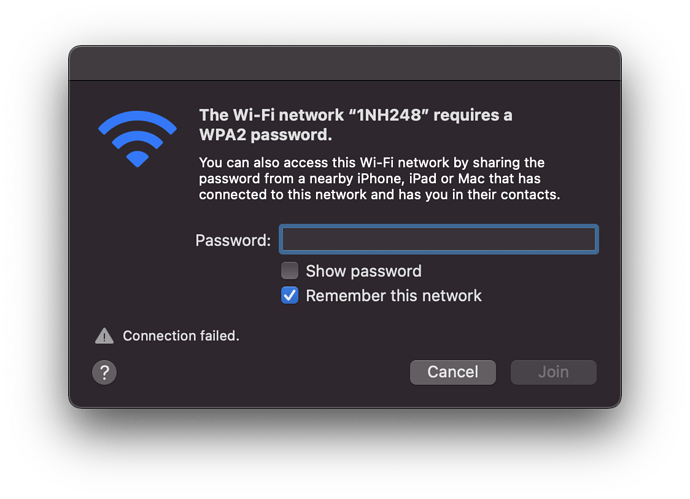 No other devices that were setup to use this wifi SSID are reconnecting either. however, If I remove the 3rd SSID '1NHLS8' then devices can connect.

The workaround that was suggested doesn't seem to work.