the buildbot is generating images, but that will take 1-2 days. (currently about 1/3 of the images have been compiled.)

If you don't find your target device on the download page check back in a few hours.

Does it support wrt3200acm because I read it doesn't support wpa3

WPA3 is not working with mwlwifi and its firmware, that is not fixable from OpenWrt's side, but a 'hardware' restriction (well, it would need a fixed firmware blob from NXP). That doesn't mean OpenWrt won't work on this device (up to WPA2), just WPA3 doesn't and probably never will.

Can we please agree on the following?

A new OpenWrt release can be called "released" 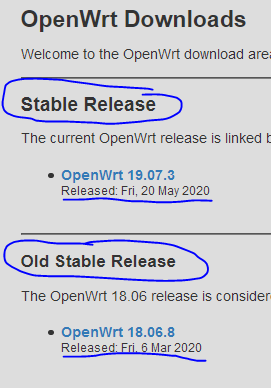 A new OpenWrt release can not be called "released"

There is always the chance that something goes terribly wrong during the build.
Premature "release announcements" by someone else than the core OpenWrt members give a wrong impression to our users, which we should avoid.

Therefore, please be patient, wait for the official announcement, and refrain from calling the new release as "released" while it isn't.

Thanks for your understanding.

19.07.4 tested on TL-WA850RE without reverting to defaults and working fine for almost 10hrs now. 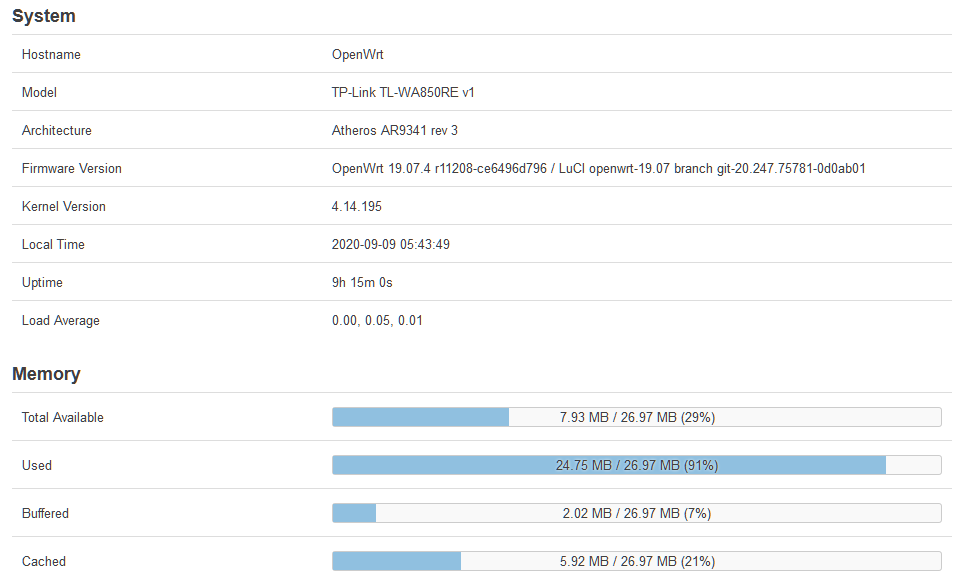 Maybe not the right place to post this, so moderators feel free to move this somewhere else.

Seems like the 19.07.4 release breaks the VLAN functionality on my Zyxel NBG6617.
I initially tested this on my production system and had trouble reconnecting after the 19.07.2 to 19.07.4 upgrade. 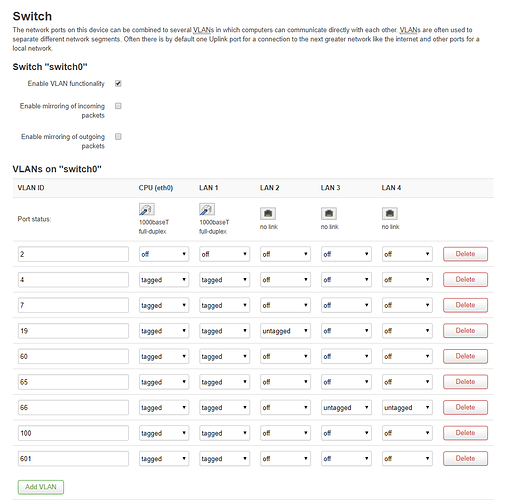 I then downgraded back to 19.07.2 and everything was fine again.

The Zyxel only connects with tagged VLANs to another managed switch, but the untagged ports on VLAN 66 didn't work either and I couldn't get access to the Router.

Later today I will start a thread with more detailed findings, but it seems that this behavior was introduced somewhere between 19.07.3 and 19.07.4, since I tested a similar setup on a spare device with various versions of 19.07.*.

Later today I will start a thread with more detailed findings

Or you can continue in an existing thread: VLAN tagging on ipq40xx (GL-B1300) no longer works

I remember seeing a page where the buildbots progress could be monitored, but I can't find that now.

Is that progress page available for those of us that like to watch paint dry?

Images for 19.07.4 have been built. Thomas, could you update the ToH
accordingly? When the download page is also updated, I will announce it,
probably tomorrow.

sure, but releasing a new version with such a bug, which was reported first a month ago would not be great...
https://bugs.openwrt.org/index.php?do=details&task_id=3273

No issues except for some reason the 2.5 and 5 GHz wireless guest interfaces were not bridged in the guest network during setup with LuCI. This may be a new normal and I've added checking this to my own setup procedure.

Seems like the 19.07.4 release breaks the VLAN functionality on my Zyxel NBG6617.
I initially tested this on my production system and had trouble reconnecting after the 19.07.2 to 19.07.4 upgrade.

Wonder happened for this device?!?

Snapshots are only built off the master (development) branch.

Most mt7621 based devices aren't ready for stable release yet, EA7500 v2 isn't the only one who didn't make it into 19.07.4
I just hope they make it into the 20.xx release but it doesn't show as of yet
https://openwrt.org/docs/guide-developer/releases/goals/20.xx

Eh? There's plenty of them in 19.07. I have two myself actually (RT-AC57U v1 and DIR-860L B1). And a DIR-878 A1 that's only got official master support. Remember, support isn't backported from master to stable releases except in very specific cases (identical to existing device in a stable release e.g.).

I am new to openwrt so maybe I missunderstood what I read on ar71xx-ath79.

I didn't say all of them, check https://downloads.openwrt.org/snapshots/targets/ramips/mt7621/ so many devices been there for a while now and didn't make it to 19.7.4 like the EA7500 v2 in our case.

And a DIR-878 A1 that's only got official master support. Remember, support isn't backported from master to stable releases unless in very specific cases (identical to existing device in a stable release e.g.).

I think you are confused, we weren't talking about if a device is supported by OpenWrt or not we were talking about a device image moving from development phase (snapshot) to a stable release image (19.07.4) your DIR-878 A1 and the EA7500 v2 are still in snapshot phase which means they are still in development which means there is no official support for them yet. in fact they warn you against using snapshots unless you are the experimental type cause snapshots might render your device nonfunctional.
Check this link please https://openwrt.org/faq/difference_between_a_release_and_a_trunk_build