This clearly is a bug. I think in the driver, perhaps.

All European Union countries should have the same 5GHz channels available.

Furthermore, if the country code is EE, then the below command in CLI does not work:

Scanning of 5GHz networks also does not work from Luci.

If the country code is DE, then the same command returns a long list of data and 5GHz network scan works, even from Luci.

Same in country code FI (Finland) and AT (Austria). The selection of 5GHz channels should be equal, but Finland has bigger selection.

WLAN (wireless local area network) channels are frequently accessed using IEEE 802.11 protocols, and equipment that does so is sold mostly under the trademark Wi-Fi. Other equipment also accesses the same channels, such as Bluetooth. The radio frequency (RF) spectrum is vital for wireless communications infrastructure. The 802.11 standard provides several distinct radio frequency ranges for use in Wi-Fi communications: 900 MHz, 2.4 GHz, 3.6 GHz, 4.9 GHz, 5 GHz, 5.9 GHz and 60 GHz bands. Each ran...

To be clear, this issue with 5GHz has been present in all OpenWrt versions that I have used. With many different routers.

I have now experimented with different country codes, and 5GHz channel 165 does not turn on under any country codes. It can be selected, but it stays gray and disabled until the channel is selected one notch below 165. For example 161.

In European Union, there are EC Directives that regulate the usage of WIRELESS, which are the same regardless of which EU country you live in. 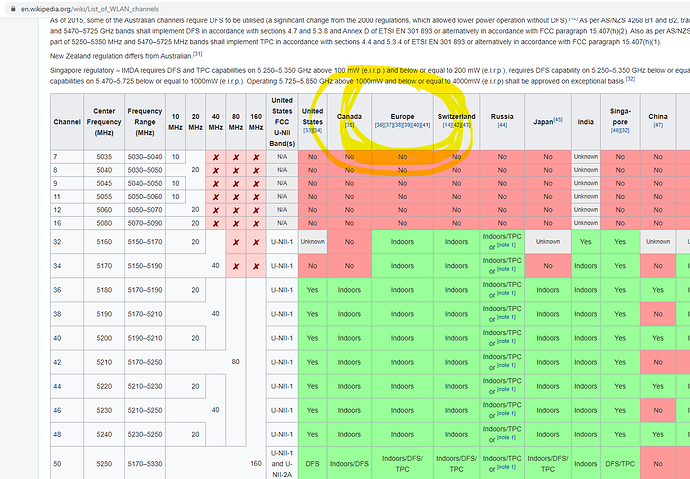 So, if I change from one EU country to another, this is the same as changing region from California to Texas.

It should not change anything. And why is the list of available channels different inside EU?

According to EC Directives, the WLAN regulations do not differ from one EU country to another no more than changing the region from California to Texas.

But in OpenWrt, it differs.

The wireless regdb that gets used by OpenWrt to set the radio parameters in accordance with national rules is incorrect in many cases.

And BTW, if the chart is out of date too, why do you reference it?

(Perhaps that was missed too; because one instead thinks I'm trolling.)

Please post the updated chart, that you are referring to.

I was afraid you'd ask that (and it comes from this notion someone has compiled some "chart"...but if that were the case, why isn't reg-db easily updated???)...nonetheless I'll immediately post what I found, then respond - so, as not to be called a troll again:

Just to note an out-of-date chart I located:

Each country issues their own "chart" (I'm currently reading Germany's - in German, in anticipation of that question - didn't find anything; but then, I understand little German). The OP for example showed UK.

I am asking WHAT we are supposed to gather from a "chart" we know is wrong?

But it seems like you might be asking for a non-existent chart (if you don't understand why such a thing doesn't exist, I will still provide the data you see - in part, as there are ~170 nations in the world and the UN facilities that control WiFi emissions).

It really will take a serious compilation of these "charts" (in quotes since in most cases there's no such thing - but usually exist as written regulations). I hope you see with just these samples, why it's needed to fix the upstream.

Hopefully this list satisfies your actual question (and I hope you were not asking me - as to be unreasonable and demand I locate the "chart" of every nation for purposes your post - but I may be willing to do so for the maintainer of reg-db).

My issue is with OpenWrt regdb concerning European Union. I have never complained about Canada or USA or China, or Russia.

The charts you posted are not relevant for European Union, apart from a vague mention of Germany, your post is not on topic nor helpful. Thanks for the effort, though - I will keep your info in mind.

Given how difficult it was to locate France's (since I speak English) - I'll digress on the chart thing (as I think my finding all 27 is your preference - mostly written in foreign languages). It may be a misunderstanding about the existence of such "charts."

Also, in some nations, these documents are not free.

Are you under the impression that EU or the European Council regulates radio?
(see https://en.wikipedia.org/wiki/Telecommunications_in_the_European_Union)

I'm lost on why you keep saying European Union like it's a country/nation with radio regulations. I mentioned the UK because of that (but in the previous thread, I honestly how it could have been mistook due to the tenor of the conversation).

Also, wouldn't you have an easier time producing at least one...especially if you're in an EU nation???

Do you find it's more inconsistent for one country - more than others?

I'm trying to trace if there was a significant change in rules and rule making regarding WiFi in the EU nations within a particular calendar year (for search purposes).

As @lleachii mentioned, compiling this information is far from easy (and highly sensitive from a legal point of view), as regulations are often layered between different documents or sometimes partially overridden by international agreements (e.g. CEPT, ETSI, etc.). That's exactly why it's so important to have many eyes, with local representation and access to local legal counsel, involved, upstream is the canonical source where this is happening - if you want changes, this is your best chance.

This gives the opponents of Free Software and opponents of OpenWrt a loaded gun. Already there is a EU Radio Lockdown Directive:

All it takes now, is someone to screenshot this discussion, and sending it to the EC Commission, to provoke further directives from them.

Why is the evidence for this thread a single screenshot from Wikipedia lol.

The answer to this is incredibly simple.
If you disagree with the rules in the regulatory db, find an official (not Wikipedia) document/ruling/legislation which lists what it should be, and send it upstream.

That is your one and only recourse here.

OpenWrt's official position is to stick to the rules published by the wireless regdb project.

I'm not sure how OpenWrt would have a "loaded gun" or be worried about the lockdown (which has already occurred in the US), nor a screenshot...

I hope you see with just these samples, why it's needed to fix the upstream.

Why do you keep insisting that the EU/EC/EP makes radio regs for nations?

I think this is a misunderstanding that you haven't figured out yet, and why you apparently misunderstand @slh about the tedious process of compiling/updating the reg-db in one consolidated location (i.e. it's main repository/codebase).