Previously I had been using an earlier version of OpenWrt (15.05.1) but I wasn't able to update the opkg lists so I updated to the newest version (18.06.04) which has (supposedly) taken up the entire flash drive of my little HooToo Nano...

However, I don't believe it really took up all the space...
LuCi says:

But in ssh it says I have a lot of space available: 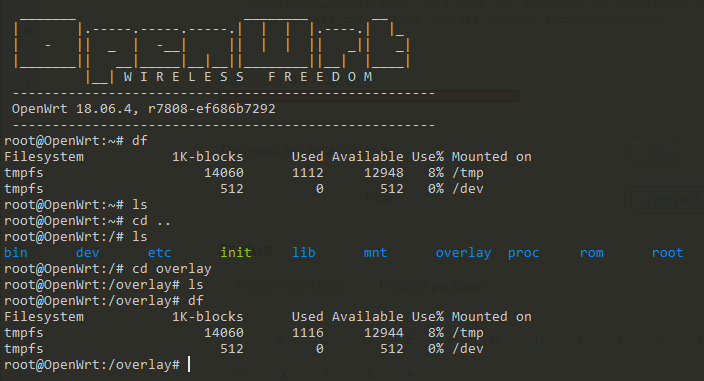 I don't know what to believe but I think it's strange it's precisely 0% available...

I know I can connect a USB but it appears in my situation I'll have to rebuild the ROM to flash on there which seems daunting.

Just want to confirm if I really have no space to try to install what I want (a VPN software so I can use it to broadcast a VPN connection over wifi)... supposedly only 9kb...

That looks like a very, very strange set of mounts.

In particular, I don't see either the /rom mounted or the /overlay

I would try reflashing and not saving settings (sysupgrade -n /tmp/some_image-sysupgrade.bin)

(As a side note, 19.07-RC1 is the "most current" candidate release, though is not officially a "release" yet.)

What device are you using?

This is my device so apparently I need to try the extroot configuration with a usb thumbdrive.
https://openwrt.org/docs/guide-user/additional-software/extroot_configuration

........
Actually I'm realizing I may now have it working with a command line build: 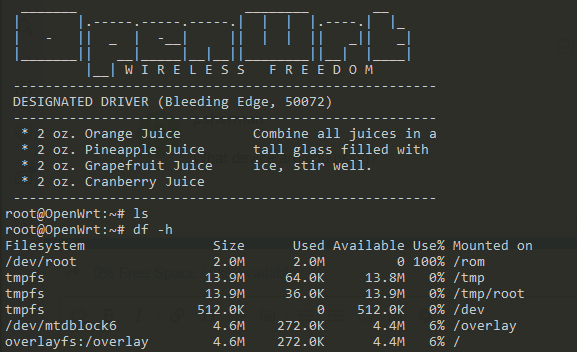 I'm just trying to get the hang of it enough to connect to the wifi so I can try to update the package list and see if I can install stuff...

"Designated Driver" -- not release firmware -- that was the name before the LEDE split, which produced v17. You definitely should upgrade as (a) there are multiple, severe, well-known, actively exploited security vulnerabilities in that kernel, third-party firmware, and even 802.11 protocols themselves, and (b) there likely aren't going to be package repos that match what is either an OEM build or a non-release snapshot.